The Salon bench at Craftivism, Arnolfini Bristol 04/01/2010>
The Knitting Salon is a project by Trevor Pitt and Kate Pemberton that promotes the sharing of knitting skills via the use of a specially designed mobile salon, comprising of 8 Salon Benches that are currently being made by knitting groups throughout the UK.
For Craftivism at the Arnolfini in Bristol, The Knitting Salon project is represented in the gallery exhibition by Salon Bench Knowle West made in collaboration with local knitters and spinners.
The exhibition is at the Arnolfini in Bristol until 14 February 2010

more info
about The Knitting Salon

Open Source Embroidery 06/06/2009>
The Open Source Embroidery exhibition presents artworks that use embroidery, thread and code as a tool for participatory production and distribution. It brings together individual and collectively made artworks by artists, makers, computer programmers and HTML users that explore the relationship between craft and code through social and digital networks.

Kate Pemberton's work is featured in the OSE exhibition initiated by Ele Carpenter, starting in Sweden and touring to San Francisco. More information can be found here http://www.open-source-embroidery.org.uk/osexhibition.htm

VIVID and Fused Magazine present an evening celebrating the launch of Binary Oppositions, an international project curated by Matt Price.

Accompanying the exhibition will be a full colour catalogue, designed by Ben Javens and featuring photography by Rory Buckland, and an album titled 'Binary Oppositions', released by independent record label 'Static Caravan'. Both catalogue and album have been published in a limited edition of 500 copies and will be available for purchase throughout the event.

Cheap&Showy Billboards 27/06/2007>
There are currently 4 billboards around Birmingham city center featuring the Cheap&Showy artwork. They are up for the duration of the New Generation Arts festival. More information about the piece can be found in the press and projects sections of this website. 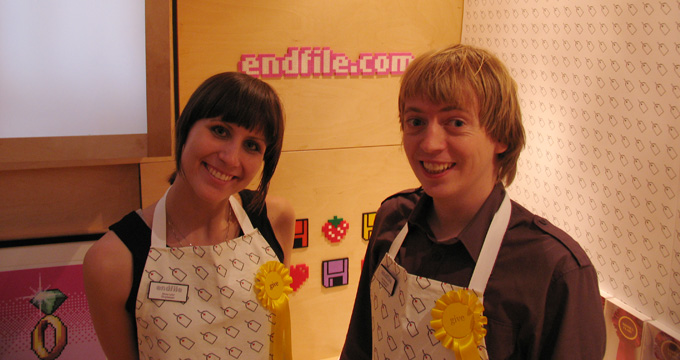 Mini Shop at VIVID 23/05/2007>
The endfile mini shop opens tonight at VIVID in Birmingham.
Kate Pemberton has explored the concept of the 'art object' and its relationship with mass production. She will transform VIVID's 'pod' into a retail and showcasing outlet for her work.

Citric Gallery >
Kate Pemberton is now represented by CITRIC Gallery.
CITRIC gallery is based in the historic center of the city of Brescia in North Italy, and is directed by Lavinia Muscat.

Made in the Middle comes to Birmingham 31/01/2007>
The Craftspace-touring show in which Pemberton is exhibiting has arrived in Birmingham. It is open to the public from 1st Feb - 14th March at the Midlands Arts Centre (mac).


Pemberton wins textile prize 15/11/2006>
It has been announced that Kate Pemberton is the winner of the textile prize for best work in 'Made in the Middle' - a new touring exhibition by Craftspace.
http://www.craftspace-touring.co.uk

Error 01/08, The Cursor canvas, and the System Rosettes will be exhibited. All works will be for sale.

'Made in the Middle' is a major survey of contemporary craft from makers with a connection to the West Midlands. Selected by a panel of curators, design historians and leading national makers, 37 cutting-edge makers are showing their latest work in this national touring exhibition.

'Made in the Middle' takes place every three years attracting over 37,000 visitors and this will be the sixth in the series. The exhibition will tour to 9 other major galleries throughout the UK.

Playmobiel Book 31/10/2006>
After the success of the exhibition 'Playmobiel' in Amsterdam in June, curator Nathalie Faber decided to make a book about the artists in the exhibition.
Pemberton's work appears throughout the book, having been used as the introduction to each section! More details can be found on the dedicated website.

Monogram Workshop 05/10/2006>
Visitors to Solihull gallery were invited to stop by, have tea and cakes and join Kate Pemberton and curator Jess Morgan to create their own stitched monograms.
During the day, Jess gave a talk about the exhibition and Pemberton's practice.
Over 30 monograms were stitched by participants and delivered to the gallery to form one half of the exhibition.

Royal Icing Private View 06/09/2006>
The private view for Pemberton's exhibition 'Royal Icing' at Solihull art gallery was a success, and even the mayor turned up.
For more information about the pieces shown please view the Royal Icing artworks.